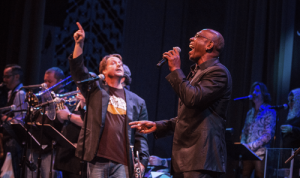 The Lon Bronson Band joins forces with former Tower Of Power Lead vocalist, and current Temptation, Mr. Larry Braggs, for an evening of classic 60’s & 70’s Soul. The music of Otis Redding, Marvin Gaye, Sam Cooke, Wilson Pickett, and of course Tower Of Power, will be ceremoniously performed by Vegas’ favorite eclectic horn-infused 14 piece Lon Bronson All-Star Band. Universally hailed as one of the world’s leading Soul Singers in his own right, Larry triumphantly returns to Cab Jazz after garnering rave reviews from his last Smith Center appearance. Larry is best known for his 11-year reign as Tower of Power’s lead vocalist and front man, a rare talent not to be missed.

Buy your tickets before they sell out!

No shows booked at the moment.